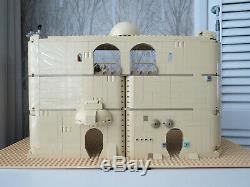 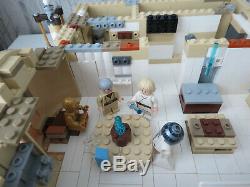 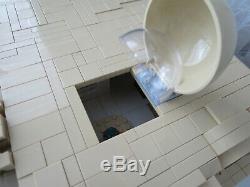 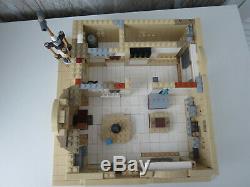 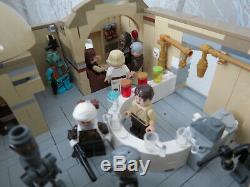 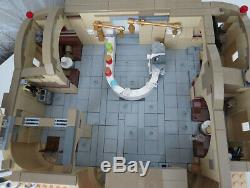 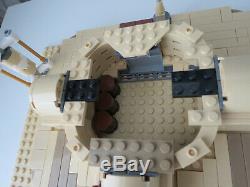 STAR WARS MOS EISLEY Tatooine Custom MOC set with Obi Wan Kenobi House, Skywalker Homestead, Cantina and Docking Bay 94. The custom sets are: Chalums Cantina, Luke Skywalker/Uncle Owen and Aunt Beru homestead, Obi Wan Kenobi's House and half of docking bay 94 which can accommodate a midi-scale Falcon. Luke Skywalker/Uncle Owen/Aunt Beru Homestead. Ideal if you have a Sandcrawler. This is based on the official layout of Obi Wan's house, alongside both versions (original and special edition) of the exterior of Obi Wan's house.

The majority of the set and all of the removable roof is tiled off. The moving dome roof allows you to view in on the characters either through a open square, or transparent dome. Alongside the figures from Lego's own made Obi Wan house, this includes the official Leia Hologram part in this set and training droid.

This is a two base plate structure that allows you to recreate in part the Millenium Falcon escaping from Docking bay 94. It is a three part structure, the bay itself, the middle structure which is how the larger structure supports itself, and the top floor that allows figures (maintenance workers or smugglers etc) to stand. Outside of the bay are'street's for the characters, which can be combined by bringing the other sets together.

The support plate structure pieces underneath the plate and above it keep both plates together, allowing it to be carried with ease. This is a larger version of Chalums Cantina that allows you to recreate a number of scenes specifically the meeting between Greedo and Han, alongside Han, Chewbacca meeting Luke and Obi Wan Kenobi for the first time. Note it combines two versions of the Lego Cantina with a large number of modifications (Bar, tiled floor, larger layout etc). All four sets can be combined to make a larger Mos Eisley spaceport, with the'homes' doubling as alternative building structures.

Note four of the base plates are from funhaven which have a thicker base but are just as reliable as the official lego baseplates. The lego official fifth plate is attached to Luke Skywalker's house. Estimated parts 4500+ (over 2350 are from the lego sets alone). The majority of parts are in a like new condition ie not faded. All lego comes from a pet and smoke free home.

The MOC features parts and figures from the sets listed below. With the exception of the vehicles or spaceships, any'building' set has been merged with the overall moc. For example the parts used in Obi Wan's Custom house are partially from the actual lego set. Note this is a one off large scale set and is not mass produced nor do I have instructions.

That is 38 figures total more may be added to this set alongside further sets. Also included are two custom made GONKS, a random Christmas PORG and Mynock and a Christmas GONK.

Note'complete' includes all figures as described above the figures you see in the images are what is included. 75205 MOS EISLEY CANTINA (small version - Complete with instructions and box).

The item "STAR WARS LEGO Tatooine Custom MOC Mos Eisley CANTINA, HOMESTEAD, DOCKING BAY 94" is in sale since Sunday, July 19, 2020. This item is in the category "Toys & Games\Construction & Building Toys\LEGO Building Toys\LEGO Complete Sets & Packs". The seller is "danielc3188" and is located in Maidstone. This item can be shipped to United Kingdom.