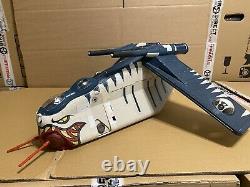 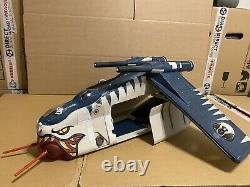 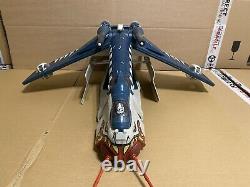 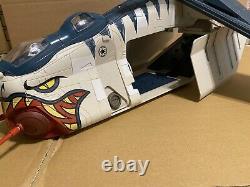 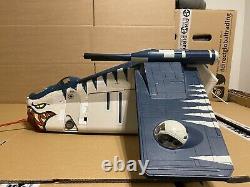 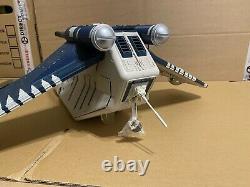 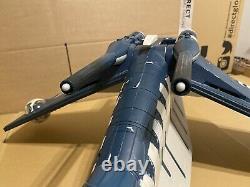 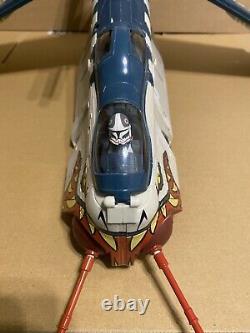 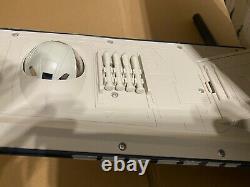 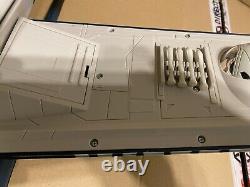 Hasbro Star Wars Clone Wars Republic Gunship Tigershark Custom 3.75 Scale. This is a kitbash between the saga collection republic gunship and the clone wars crumb gunship. I liked the design of the clone wars crumb version with the side doors which fully closed as opposed to the doors on the tiger shark version which were too short to do that.

So I bought one of each and transferred the larger doors to the tiger shark version (they just clip on to the hinges). The smaller doors under the cockpit clip in place but they dont swing down as there are no holes for the door pegs to plug into, you just pop them in and out as you need to. It has a complement of missiles clipped under each wing as shown in photos but no extras beyond that.

The original side bubble cannons are not included as they went in the bin years back. It has the rear cannon and I think some sort of rappelling line still in its bag at the back. Ill throw in the custom pilot I made for it years ago as seen in the cockpit in the photos. The item "Hasbro Star Wars Clone Wars Republic Gunship Tigershark Custom 3.75 Scale" is in sale since Sunday, February 7, 2021. This item is in the category "Toys & Games\Action Figures\TV, Movies & Video Games".