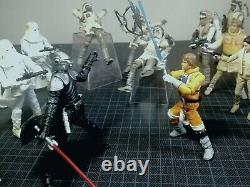 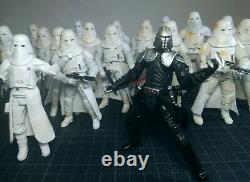 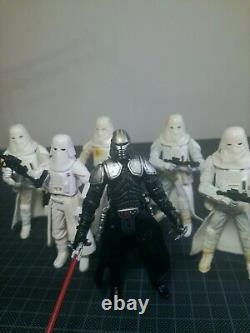 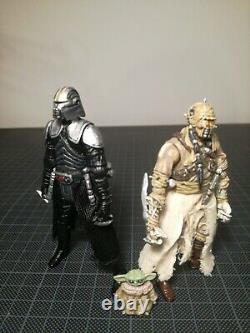 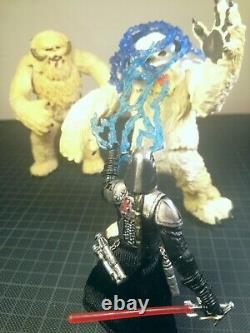 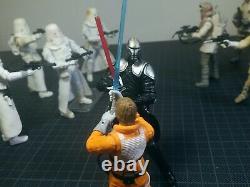 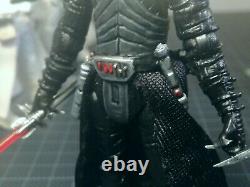 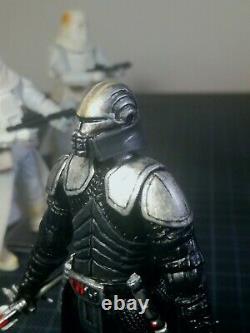 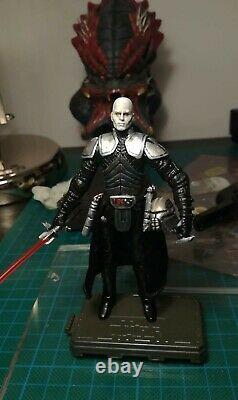 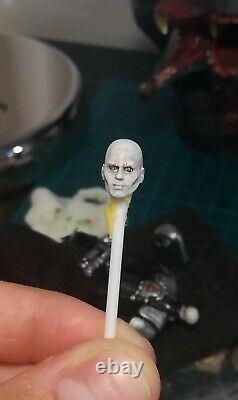 Up for sale is a custom made. 3.75 scale Lord Starkiller Hoth The force unleashed sith edition. This figure is inspired by the Force Unleashed game. Stom-made, hand painted, sculped with 100% screen accuracy and primed with varnish.

Figure is high quality custom. This is one of a kind figure. Price is for only the Hoth Starkiller figure! Rest of the figures are just for display.

Write to me if there are any CUSTOM characters you would like me to make. The figure has ball-jointed head, ball-hinged. Shoulders, elbows, hips, knees, ankles and swivel waist and wrist total off 24 points of articulation.

Galen Marek (pronounced /eln mæk/), codenamed Starkiller, was a Force-sensitive Human male taken on by the Sith Lord Darth Vader as his secret apprentice and personal assassin during the reign of the Galactic Empire. The son of two Jedi Knights, Kento and Mallie Marek, Galen was born on the Wookiee homeworld of Kashyyyk in the aftermath of the Clone Wars. Following his mother's death, Kashyyyk was invaded by the Imperial Military. As a target of the Great Jedi Purge, Kento was confronted and slain in a lightsaber duel by the Dark Lord of the Sith, who discovered the fugitive Jedi's son in the process. Gauging the orphan's raw strength in the Force, Vader abducted and ultimately raised Galen to embrace the dark side of the Force.

In time Marek forgot his past and even his birth name, having been taken from his home as a child by the Dark Lord. Though trained in the Sith arts, the Rule of Two dictated that there could only be two Sith Lords at a time, and therefore Marek could not consider himself a true Sith while his master was still apprenticed to Darth Sidious.

As such, Vader kept his apprentice's existence a secret, bestowing to him the call sign Starkiller. For years, Starkiller aspired to truly become one with the Order of the Sith Lords, believing it was his destiny to help Vader overthrow Sidious and usurp his throne as Galactic Emperor. As his training neared completion, Starkiller was ordered by Vader to kill the few remaining members of the Jedi Orderspecifically the Jedi Masters Rahm Kota, Kazdan Paratus, and Shaak Ti. The apprentice completed his missions, prevailing against his more experienced targets, only to be betrayed by his master after the Emperor confronted them.

Stunned by this turn of events, Starkiller nevertheless remained loyal to Vader, and began fomenting a rebellion against the Galactic Empire as part of his master's plan to depose Sidious. The mission was another ruse, however.

After the apprentice convinced Bail Prestor Organa, Garm Bel Iblis, and Mon Mothma to join him, Vader had the senators arrested and left Starkiller for dead, betraying him once more. But the apprentice lived; resolving to rescue his allies, he managed to infiltrate the Death Star before the Emperor could execute them. Although he was killed in the ensuing battle aboard the battlestation, the senators were able to escape with the help of Starkiller's companions, PROXY and Juno Eclipse. As a result of the apprentice's actions, the Alliance to Restore the Republic was formed, uniting malcontents across the galaxy under the sigil of Galen Marek's family. Perfect condition, full HD photos of item. The item "Star Wars custom 3.75 Lord Starkiller Hoth The Force Unleashed sith edition" is in sale since Friday, September 25, 2020.

This item is in the category "Toys & Hobbies\Action Figures\TV, Movie & Video Games". The seller is "lag_bestcustoms_swcollector" and is located in Warszawa, MAZOWIECKIE. This item can be shipped worldwide.