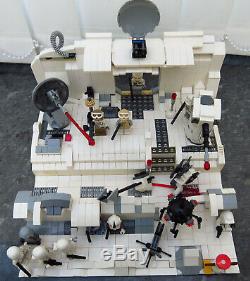 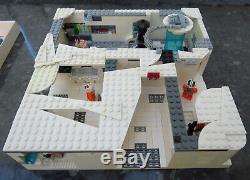 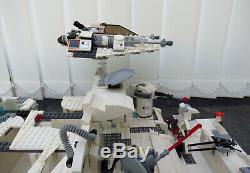 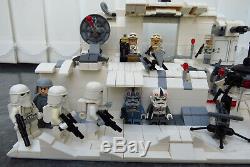 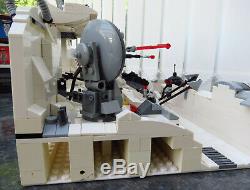 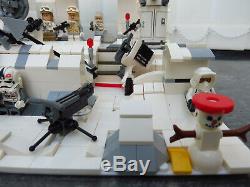 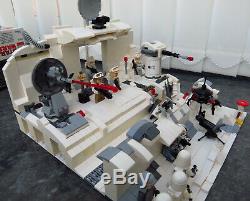 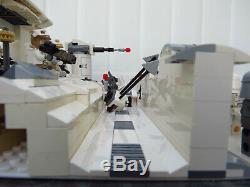 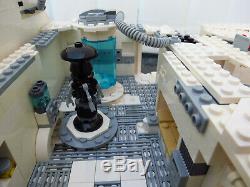 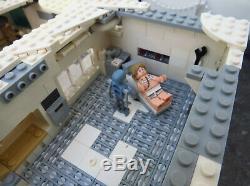 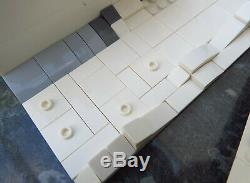 STAR WARS HOTH ATTACK LEGO MOC FEATURING SETS 75138 (HOTH ATTACK) 75203 (HOTH MEDICAL CHAMBER) and 75259 (SNOWSPEEDER 20TH anniversary) and a lot of other parts! I do not have instructions for this moc build. Note this is strictly a one off moc and is not mass produced. This is a production of the outside area of the Hoth South Corridor (mentioned in the film by Leia, but not seen) during the evacuation.

It shows a last Rebel stand keeping the Imperial troops at bay before the evacuation of hoth. It uses pieces from sets 75259 (figures, cannon and speeder), 75138 parts, figures and a smaller Hoth Cannon that is more relevant scale wise compared to the original. The split speeder bike is purposeful as it represents a crashed speeder with a scout trooper pinned down as a probe droid attempts to cover him, alongside other attempts to breach the south corridor base. There are play features visible in the pictures - mostly in the use of the moving/firing cannons and the medical area. Inside is a custom medical area, using set 75203, alongside a mini command area and weapons storage room.

The baseplate for the hoth outside is not a lego original, neither is the base set that base is from the set funhaven. They fit the parts and rarely, if ever come loose. Note both are different baseplates.

I have found both plates to be more reliable than a real lego plate. Both will be supplied with the model. Most of the base is'tiled' (smoothed) off (the exception being the medical bay top and the weapons storage room). The tiles with'circles' are placed specifically for the figures to remain in a standing position. The support structure (roof) for the medical part of the base keeps it secure, but understandably not neat, however, it allows you to see the figures.

Note to keep the medical part of the base raised I used two books to keep it in line with the top half of the entrance of the outside section. If need be, parts used as'steps' could be used without the need to raise the base with the books. To confirm the figures seen in the photos are included are. Hoth Han solo, Rebel hoth trooper, Snowtrooper and a probe droid supplied from set 75138 as with the set all figures are retired and no longer produced by lego. Additional figures included are Hoth Imperial officer (can double for General Veers if required), two additional snowtroopers (one has fading on arms), 2 AT-AT pilots (white and grey), scoutrooper (from Jedi but has been noted to appear in'Empire' in other Star wars materials), General Rieekan, two rebel troopers inc another officer known as.

Colonel Ledick Firest (the guy with the mustache in hoth trenches in Empire Strikes Back). The snowman, E-web cannon and speeder bike (without handles) is being supplied. As per the pictures, you are getting all the boxes and instructions for those sets. On the chance you want the whole thing broken down to build your alternative moc, I can offer this option. However, I will be placing the parts in category packets (tiles, bricks) not the instructions for the three sets supplied.

In terms of parts total, honestly I have lost count! All parts from the new sets are in excellent condition and have been kept away from sunlight and only taken down from display for this photo.

Where possible I have tried to use/hide them for support (underneath the front part of the base) purposes, rather than remain on show etc. However, some bricks will show fading within the medical bay area. Note the cafe brick was included for amusement purposes only. All my lego comes from a pet and smoke free home. This is a non-return item. Item will be dispatched via recorded or secure method. Not hermes or yodel etc.

The item "STAR WARS LEGO CUSTOM HOTH SOUTH ENTRANCE MOC 19 FIGURES WITH THREE SETS" is in sale since Friday, October 18, 2019. This item is in the category "Toys & Games\Construction & Building Toys\LEGO Building Toys\LEGO Complete Sets & Packs". The seller is "danielc3188" and is located in Maidstone. This item can be shipped to United Kingdom.