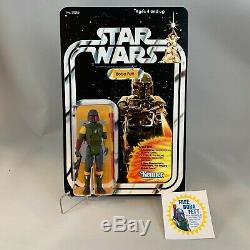 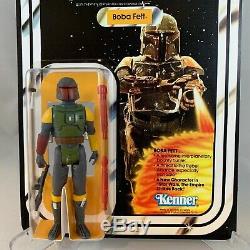 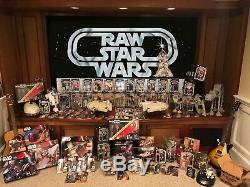 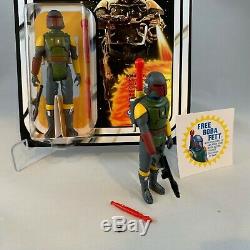 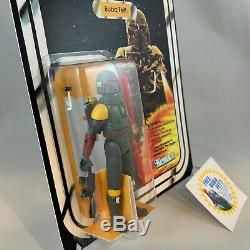 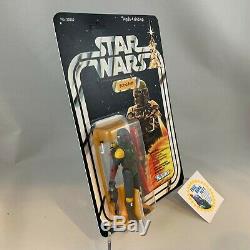 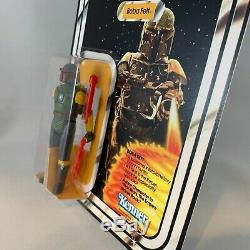 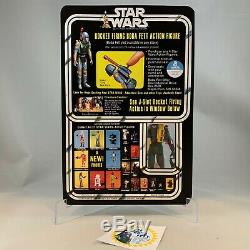 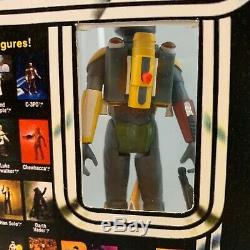 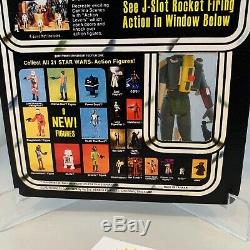 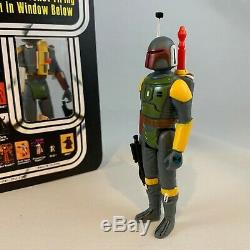 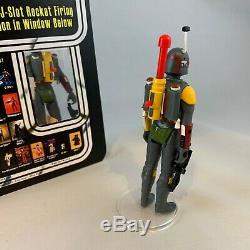 This is a NEVER RELEASED STAR WARS BOBA FETT PROTOTYPE Action Figure - Fully functioning "Vintage-Style" PROTOTYPE Action Figure as seen advertised on early Kenner cardbacks! This perfectly made custom molded figure with 5 points of articulation comes complete with working spring-loaded Rocket-Firing Jetpack, 2 different rockets, blaster and attachable Range Finder Eyepiece. This custom figure has been mounted on a Custom 21-Back Cardback that has been made with a clear plastic window to show off the Rocket Firing action on the back of the card. Truly One-Of-A-Kind Star Wars collectible, MINT DISPLAY QUALITY. HISTORY OF ROCKET FIRING BOBA FETT FIGURE.

Work began on advertising Boba Fett to children through adapting the. 20 back cardbacks released in early 1979. The third iteration of the cardback, designated 20c, features a starburst shape advertising the free Boba Fett on the front of the card with information on how to receive the figure on the reverse.

The initial promotion, although extended several times, was designed to run until 31/5/1979. However, from the fourth iteration of the 20 back onwards the firing mechanism element of Boba Fett had been covered over, the figure had been adapted and a new Kenner catalogue featuring a non-firing Fett was released mid February 1980. Had happened between August 1978 and February 1979? Kenner would have undoubtedly been aware of the public unrest with toys that fire missiles, Mattels Battlestar Galactica line featured firing missile toys that led to tragic consequences and product recalls.

However, Kenner had already decided to scrap the Rocket Firing Fett before this time period due to Quality Control refusing to sign off on the product. Orders came from management that the prototype Rocket Firing Fetts were to be destroyed and they were broken into pieces before being discarded. A quick analysis of the toy highlights the problems that Kenner faced. To date there are believed to be around 80 L slot Fetts.

The vast majority of these are unpainted but there are some examples of hand painted Fetts out there. The problem with this model is fairly obvious. When the tab is its resting position there is no mechanism to stop the rocket from firing if accidentally moved. This led to an improved design.

To date there are believed to be 19 J slot Fetts in existence. A small tab was added to the slot which was designed to prevent the accidental discharge of the rocket. However, this led to a new problem as the plastic tab was very brittle.

The Rocket Firing mechanism had already been scrapped by this point and stickers were being applied to the 20c cardbacks which had not went to stores. And until recently, that was the end of the story. Last year, in Cincinnati vintage.

Imagine their surprise when not only did it come with both missiles (see above) but it also came with the plastic bag and mailer box! So, did any actually make it passed this stage?

Kenner employees have informed us that there were still many stages after this before a product would be sent out. The mailer box and baggie above are both prototypes and no products were ever despatched from this factory outlet. TAKE A LOOK AT THE PHOTOS AND PLEASE, ASK ANY QUESTIONS.

This is not an original card or blister (bubble), it has been handcrafted using stock photos of the original cards and customized to include a plastic window to feature the J-Slot Rocket Firing action of this Boba Fett Figure. The hole punch is real and the punched cardboard has been reinserted to give the "unpunched" appearance. You can take that hole punch piece out if you prefer. PROTOTYPE ROCKET FIRING BOBA FETT figure is a high-quality custom injection molded in ABS and hard PVC, fully functioning ROCKET FIRING BOBA FETT "Vintage-Style" Action Figure in the exact same color & type of plastic as the original never-released prototype!

Complete with working compression spring-loaded rocket-firing Jetpack with 2 different rockets, Range Finder Eyepiece, blaster and all 5 points of articulation. The Display Cases I use are. The VERY BEST Display Cases available. For these vintage carded figures. I've always wanted to re-claim my favorite childhood toys; these original Star Wars figures. Seeing the original figures in their original packaging is Nirvana! Then I saw what a few people are doing out there and I thought, I could restore these figures, recreate the packaging and the artist in me saw how I could do it really well. The result is these beautiful cardbacks that present these original figures the way they were meant to be. I can live with a reproduction lightsaber, cape or weapon, as long as the figure looks great and new like it was when it was first put in a blister. I just do Star Wars so I've tuned my skills on these figures to get them as best as they can be.

Again, please ask me any questions you have and. Let the force be your guide! The item "STAR WARS BOBA FETT PROTOTYPE Never Released Figure ROCKET FIRING MOC CUSTOM" is in sale since Tuesday, August 27, 2019. This item is in the category "Toys & Hobbies\Action Figures\TV, Movie & Video Games". The seller is "rawstarwars" and is located in Sayville, New York.