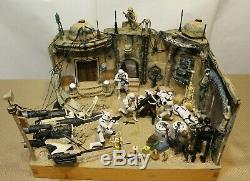 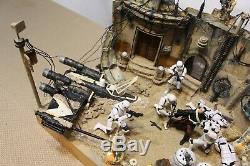 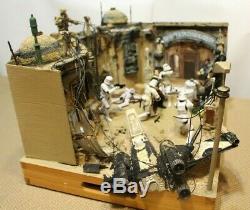 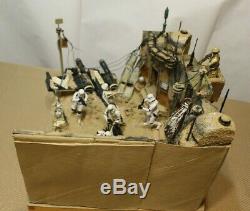 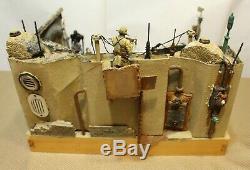 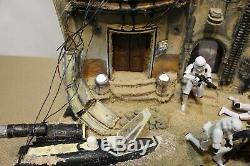 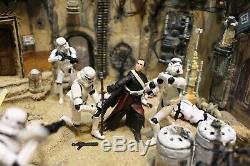 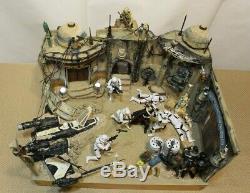 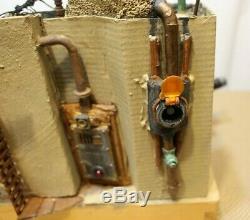 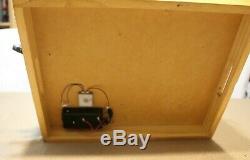 Revive this epic scene where Chirrut Îmwe, a blind warrior monk from a near-extinct order, the Guardians of the Whills, confronts a squad patrol of occupying imperial Stormtroopers in Jedha. Also Jyn Erso, Cassian Andor and K-2SO, among other characters. I have entitled this diorama: Is Your Foot Alright?

Given the moment depicted in it. All the eleven (11) action figures are 3.75 inch Hasbro brand and included. The diorama dimensions are approx. 15 x 12 x 11 inches and comprehends a wooden board textured with real painted sand/gravel, cardboard (buildings), plastic, wood and metal accessories.

Semi posable: 50% or less of the joints are fixed/glued. Fix Pose: all or most joints are fixed/glued. Posable: All or most joints are movable (only feet/weapon glued). 1997 New Star War X- Wing Fighter model kit from AMT assembled, customized (crashed) and painted as Edrio's cavern angel X-wing (Saw Gerrera's renegades). This diorama contains a lot of awesome details like two LED lights inside two cisterns than can be turned on/off with a toggle switch located in a manhole hatch behind the main scene. These lights can be powered using 3xAA batteries (included) or a 4.5 VDC power adapter (not included). Another details (among others) are the Jedi statues! One of the was destroyed may be by a blaster?

And the ladder used by Two Tubes to climb to the top of one of the buildings. The diorama structure (except figures and accessories) was completely Hand-Made from scratch NOT LASER PRINTED!

Some figures have additional paint or small body parts added or removed for posing purposes. See photos for amazing detail, this is the real deal! NOTE: This item is best recommended for serious Star Wars collectors or filmmakers. Although this was made as durable as possible, it is still constructed of fragile materials which are why it is best left for display.

This is one incredible diorama that will be sure to receive positive compliments once displayed in your home. Not responsible for misuse of electric circuits included in this diorama. The item "Star Wars Rogue One Jedha Skirmish Custom Diorama with 3.75 figures" is in sale since Monday, September 30, 2019. This item is in the category "Toys & Hobbies\Action Figures\TV, Movie & Video Games". The seller is "alberto20055" and is located in Humble, Texas.