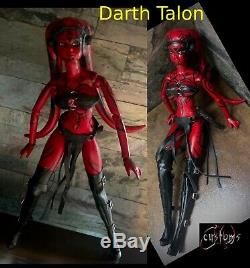 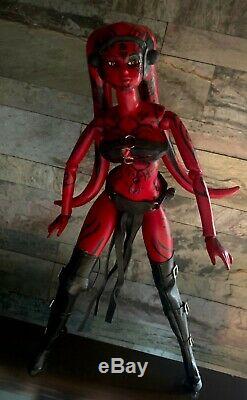 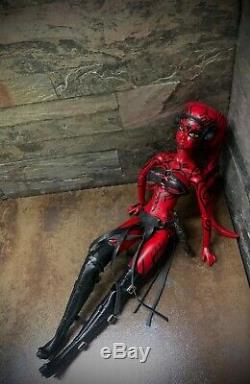 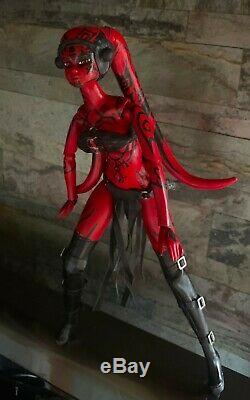 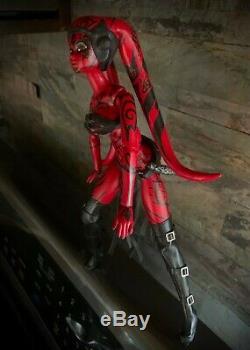 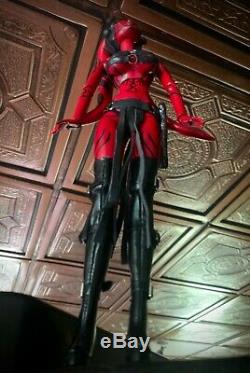 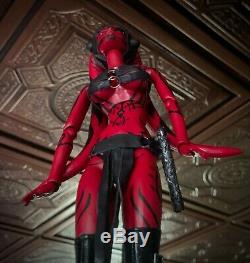 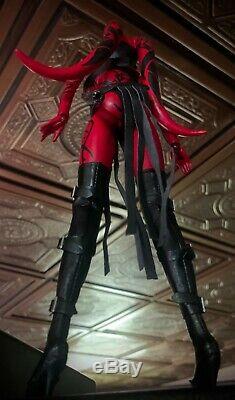 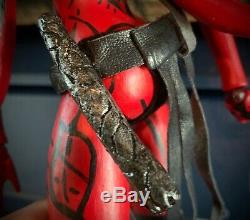 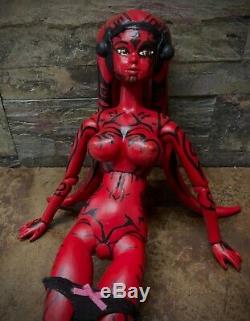 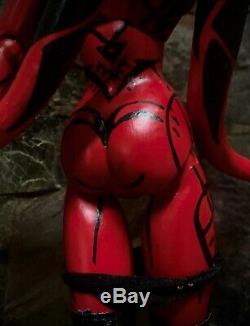 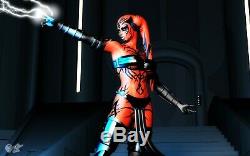 Pictures are of the actual item. New One of a Kind Professional Custom 1/6 scale (11 inch) figure by JVCustoms. This is Darth Talon, female Lethan Tw'Lek who became a Sith Lady in Darth Krayt's One Sith in 137 ABY.

Head is from a Sekiguchi Momoko Doll. Body is Volks Beauty F-type with Soft Bust. Lekku were made from Sculpey. Entire Head and body were. With Vallejo Acrylics and sealed with Vallejo varnish for stability.

The Sith tattoo design is based on the fantastic artwork of DarthHell (see pic 12 for an example). Outfit is custom made from leather, pleather and metal. She also comes with a pair of black Momoko panties. As shown in some of the photos where she is standing on her own on top of my stove and refrigerator. NOTE: THIS FIGURE HAS REMOVABLE CLOTHING BUT IS NOT ANATOMICALLY CORRECT.

You have passed your final test without flinching. I name you Darth Talon and you will now be one of my HandsMy own personal assassin. Henceforth, you will take orders only from mereport only to me.

Darth Talon was a female Lethan Twi'lek who became a Sith Lady in Darth Krayt's One Sith in 137 ABY. Talon was styled with black Sith tattoos covering her body including her head and lekku; each tattoo had been earned in ritual combat and inscribed by Krayt himself. As a Sith apprentice, she was trained by a fellow Twi'lek Sith Lord named Darth Ruyn, whom she later killed on Krayt's command with a swift decapitating strike of her lightsaber, shortly before ascending to the rank of a full-fledged Sith in Krayt's Order.

Recognizing her unshakable loyalty, Krayt anointed Talon as one of his two Hands, thus making her an extension of the Dark Lord's own will. In this capacity, Talon found herself working alongside her Hand counterpart, Darth Nihl. Talon was often tasked with her Master's most important missions, including the capture of the Jedi fugitive Cade Skywalker, and his training in the ways of the dark side of the Force, until her apprentice renounced the One Sith. Talon always remained loyal to her lord Darth Krayt, even during Darth Wyyrlok's attempted takeover of the One Sith, aiding Krayt in his recovery and along with Nihl fighting off the Sith who stood between Krayt and his former Voice, witnessing his return to power.

When Darth Krayt finally fell during the Battle of Coruscant, she entered hiding along with the rest of the One Sith, working from concealment to achieve their goals by less overt means. The item "Star Wars Legacy DARTH TALON 1/6 OOAK Custom Action Figure Doll Volks Momoko" is in sale since Wednesday, July 15, 2020. This item is in the category "Toys & Hobbies\Action Figures\TV, Movie & Video Games". The seller is "psychotropia76" and is located in Clarkrange, Tennessee. This item can be shipped worldwide.