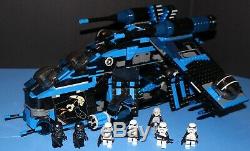 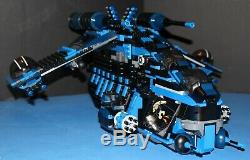 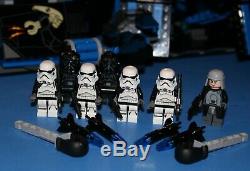 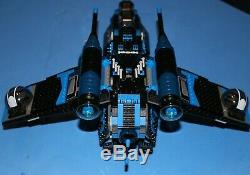 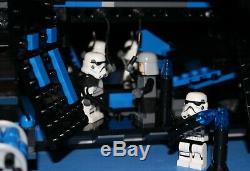 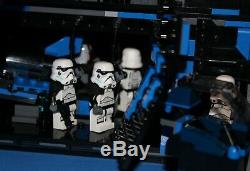 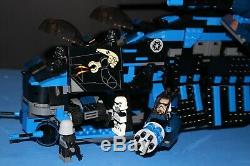 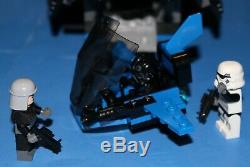 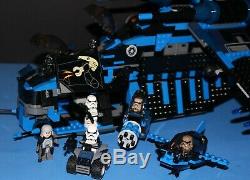 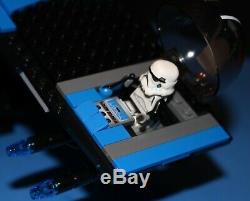 Joe's Store specializes in custom LEGO brick creations such as the set in this listing as well as custom aftermarket accessories and hand detailed minifigures. Please note that Joe's Custom Creations is a custom plastic building brick, set, and minifigure shop that is not affiliated with the LEGO group. After viewing this listing come and check out the store, new items are added on a regular basis! This listing is for one of Joes newest customized versions of the model 7676 Gunship. A REBELS IMPERIAL SHADOW GUNSHIP!

Dark Blues, Blue, & Black. By its crew because it haunts the rebels' dreams! Includes 7 official LEGO Minifigures as pictured!

They also hold a Clone Gunner for Precision marksmanship. Even the canopy opens for the figure to be inserted in and out. These Gatling Guns are specially created to give this Imperial Gunship even more firepower! Each side mounted Gatling Gun comes with a place for one trooper to sit and operate the gun, plus a canopy that opens! They can be rotated to fire forward by "pilot remote" or using a gunner to shoot from the sides.

But wait there is MORE! Each wing of this Gunship holds two detachable missiles and a real shooting.

Cannon mounted under the wings that really fires. Truly an interactive feature that is sure to give hours of fun target shooting at your separatist ground forces. Affectionately called "the Mosquito" by its crew, this mini escape pod is equipped with a canopy that opens, seat for one clone, blaster cannons for close air support, and even folding wings so it can fit in the cargo hold of the gunship (see pictures). Applied to large parts of the gunship like the original factory versions add to the visual affects of this unique model.

Imperial gunship a unique and one of kind creation that has great interactive features even better than the original. Please Note: Not all original parts for the factory 7676 Gunship are included, only parts shown. This one of a kind masterpiece was created using 100% LEGO Bricks, painstakingly collected.

Additional customizations will be clearly explained as well. Only the Custom STICKERS for the gunship shown are included in this set, stickers will be applied unless otherwise requested. Continue the Star Wars saga, Crush the rebels! With this Imperial Gunship, no enemy force on the ground stands a chance!

ALL BUYERS MUST PAY USING. · We do not mark merchandise values below value or mark items as "gifts" - US and International government regulations prohibit such actions. The item "LEGO brick STAR WARS MOC 7676 REBELS IMPERIAL GUNSHIP + 7 Fig Crew 100% LEGO" is in sale since Sunday, November 3, 2019. This item is in the category "Toys & Hobbies\Building Toys\LEGO Building Toys\LEGO Complete Sets & Packs".