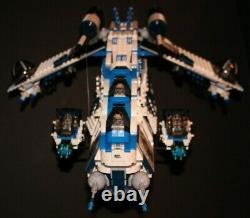 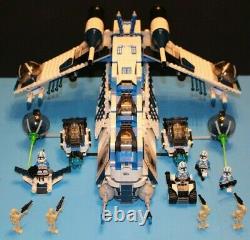 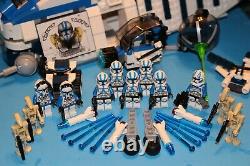 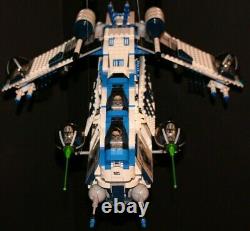 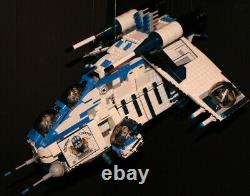 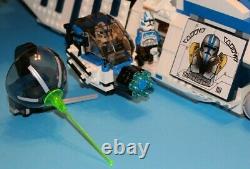 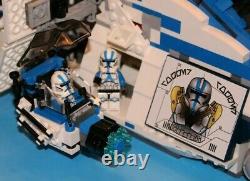 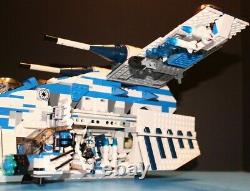 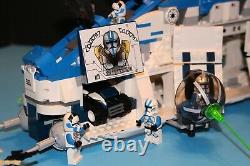 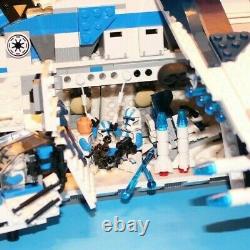 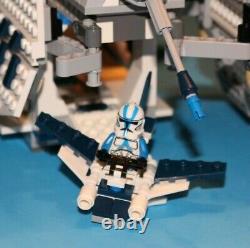 Welcome to Joe's Custom Creations! This is a unique store that offers many great hard to find or out of production factory LEGO® minifigures, sets, and accessories! Joe's Store specializes in LEGO brick creations that use 100% official LEGO brick parts. After viewing this listing come and check out the store, new items are added on a regular basis!

This listing is for one of Joes updated customized MOC (My Own Creation) versions of the model 7676 Republic Gunship. 501st Blue GUNSHIP - Hybrid Version! 7676 model version with the bay doors that completely close! This Hybrid version combines the fully closing cargo bay doors of the 7676 model set with the Bubble lasers & side pods of the 75021 design. Check out the pictures and mount the laser pods or firing Gatling Guns - both sets of pods are included!

Affectionately called The Hammer by its crew because it hits so hard! All New 8 Minifigure 501st Customized Crew! This crew features the new 2020 501st design (except the pilots which have the older & Rare 501st Pilot helmets & torsos).

Made from 100% factory new LEGO bricks - over 1,190 pieces - only display model built for pictures - your model will arrive sealed in numbered factory polybags - just like a factory set except no box! Step by step building instructions included in picture. Jpg format on a USB Flash Drive!

This is a limited edition model of this version - it has taken YEARS to accumulate the parts to make these sets possible and may be many more years before any more see the market again! This is a time of great uncertainty for the Republic.

The Separatists are are advancing and maintaining a strong hold on thousands of star systems. The Republic must stop the spread of lawlessness and disorder no matter where it goes! Characterized by the Blue markings on their ships, the Empire's 501st Elite Coruscant legion is an Elite Capital World Legion, each member chosen by the Emperor himself! Modeled on the original 7676 Republic Gunship - with special custom modifications like two side mounted firing Gatling. Guns (easily removable & then replaced with the custom Laser Pods - depending on the mission).

Includes Instructions for building this fantastic set on a Flash Drive piece by piece! See more details on instructions below. INCLUDES 12 LEGO MINIFIGURES: an all new 8 member crew & 4 battle droids! 8 custom Elite 501st Clone Minifigures as shown in pictures: including 2 501st Clone Pilots, 5 501st Clone Legion troopers, and 1 501st Jet Trooper as shown! This special set features many innovative special modifications to the original factory 7676 design including two side mounted swiveling Gatling Guns that REALLY FIRE! The Gatling Guns: These two side mounted Gatling Guns or "Mini Guns" swivel, pivot, and rotate to give your troopers complete air to ground firepower superiority! They also hold a Clone Gunner for Precision marksmanship. Even the canopy opens for the figure to be inserted in and out. These Gatling Guns are specially created to give this 501st Blue Republic Gunship even more firepower!

Each side mounted Gatling Gun comes with a place for one trooper to sit and operate the gun (see picture 7), plus a canopy that opens! They can be rotated to fire forward by "pilot remote" or using a gunner to shoot from the sides. They can be swiveled in just about any position.

The six barrels of the Gatling Guns themselves even rotate to provide authentic realism and really fire! This is the most playable customized gunship Joe's Custom Creations has developed yet! But wait there is MORE! Side Mounted Laser Pods : This is one of the Hybrid innovations that comes with this model which uses the Pods from the 75021 Gunship to create a movie-like laser cannon that mounts in place of the Gatling Guns.

WING CANNONS and MISSILES : Each wing of this Gunship holds two detachable missiles and a real shooting. Mounted under the wings (see underside picture 8). It also holds 4 missiles that really fire. Truly an interactive feature that is sure to give hours of fun target shooting at your separatist ground forces.

Affectionately called "the Mosquito" by its crew, this mini escape pod is equipped with a seat for one clone minifigure, blaster cannons for close air support, and even folding wings so it can fit in the cargo hold of the gunship (see picture 11). Custom decorative stickers applied to large parts of the gunship like the original factory versions add to the visual affects of this unique model.

These stickers were created by my son to really make this 501st version ROCK! Pieces are new and have never been used to build, assembly needed. These innovative features make this 501st Blue version gunship a unique and one of kind creation that has great interactive features even better than the original. All figures are new - never played with - only handled for customizing and detailing of helmets - see below. Please Note: Not all original parts for the factory 7676 Gunship are included, only minifigures and parts shown - additional parts for custom accessories like the gatling gun give this set MORE parts than the original - approximately 1,184 official Lego brick parts!

This one of a kind masterpiece was created using 100% LEGO Bricks, painstakingly collected. The model is 90% faithful to the original 7676 Republic Gunship design. Many steps were changed to allow for the special design of the Gatling Guns, Laser Pods, other vehicles, missiles and cannons, and change of color. Please note that all parts are new but may not be perfect since they do rub against each other in the original boxes and factory sets from where they were pulled to create this model. INSTRUCTIONS: A customized step by step set of jpg.

Picture instructions on a Flash Drive created from scratch will be used to painstakingly take you through the creation process! Be sure you have a PC that can use a Flash Drive and read. The instructions will detail every piece, color change, and customization STEP by STEP and will allow you to create this Masterpiece as well!

Additional customization will be clearly explained as well. The Custom STICKERS for the gunship shown are included already applied to the parts in this set, factory stickers for the republic sticker and 501st emblem will be provided as original LEGO sticker sheets. Continue the Star Wars saga, Crush the Separatists! With this 501st Gunship, no enemy force on the ground stands a chance!

ALL BUYERS MUST PAY USING. · We do not mark merchandise values below value or mark items as "gifts" - US and International government regulations prohibit such actions. The item "LEGO brick STAR WARS Custom Hybrid MOC Blue 501 REPUBLIC GUNSHIP +12 Minifigures" is in sale since Saturday, August 21, 2021. This item is in the category "Toys & Hobbies\Building Toys\LEGO Building Toys\LEGO Complete Sets & Packs". The seller is "jaf1970" and is located in Conesus, New York. This item can be shipped worldwide.